Field of Gratitude by Jacqueline Anne... 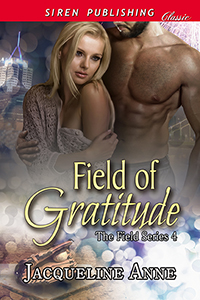 Field of Gratitude
Book 4 of The Field Series

They say things can change in a split second.

After surviving a hellish childhood as an orphan, Buccaneers pitcher Carlos Castillo keeps to himself, fearful of losing everything. That is, until he’s stranded during a snowstorm and rescued by antique shop owner Hope Hartmann.

With a passion for treasures and stories, Hope dreams of the fairy tale love and won’t settle for anything less. Then one extraordinary snowy day, a handsome ballplayer knocks on her door. Taking him in, she discovers a connection she’d never before experienced.

Carlos can’t ignore his feelings for Hope or the light she sheds on his painful past. He shows Hope heaven during hell, a time filled with threats and destruction.

It was a love Carlos never knew existed, and one Hope always wished for. Will a dangerously mysterious treasure ruin their chance at love? 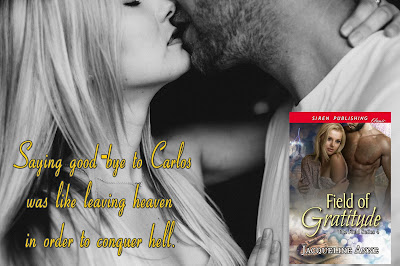 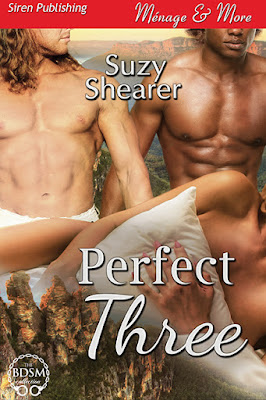 
Lucy casually glanced over at the hottie on the other side of the room.
Be still my beating heart. He was talking to another hottie!
This one looked a fraction taller, he had very dark, maybe black hair. His hair was like a wild halo around his head and his skin coloured a gorgeous rich deep burnt sienna. He had a much leaner frame but from here it looked all muscle. She couldn’t decide which one to drool over, they both looked absolutely delicious. She’d just have to lust over them both. She could see number two hottie wore a dark colour shirt and dark pants.
Hottie number one turned his head and their eyes met again. He gave her a definite smile then said something to his companion. He looked over at Lucy too and she found herself blushing. She fumbled with her drink and turned her head to look to the door.
Oh hell!
Rob was waving. She gave him a half-hearted smile and took another mouthful from her glass, only to discover it was empty. Somehow he managed to swim through the crowd and stand in front of Lucy.
“Can I buy you a drink, Lucy?”
She shook her head.
“No thanks, Rob.”
He looked disappointed.
“Dance?”
“Sorry, I told you I’m not much of a dancer.”
He looked her up and down.
“You look fantastic.”
“Thank you, Rob.”
“Hey, Lucy! Mark wants to see you, he’s near the bar.”
“Oh thanks, Margaret. Excuse me, Rob.”
She smiled at him in relief and silently thanked Mark as she made her way to the bar again. Nonchalantly glancing over to the other side of the room as she walked, Lucy noticed only one hottie there. She met Mark at the bar about to order drinks.
“Hey, Lou, just wondered of you wanted a drink. Margaret said she thought you’d finished yours and I wanted to buy you one before you left to say thank you for all the work you did for us.”
“Oh gee thanks, Mark.” Lucy quickly studied the mocktails list. “Can I have a Red Giant, please?”
It was a large glass filled with cranberry and strawberry juice then topped with lemon-lime soda. He ordered a large round of drinks and Lucy took hers from him as he put the others on a tray.
“Thanks Mark. I appreciate it and I enjoyed working with you all.”
She followed him back to the group but once again Rob intercepted her, this time at the side of the doorway again.
“I thought you didn’t want a drink.”
“I’m really sorry, Rob, it’s just Mark wanted to buy me one and I felt I should say yes because he is the office manager.”
She looked around, trying to see someone she knew nearby to save her from Rob but no one was looking.
“I asked you first,” he complained.
“I know you did and I said I’m sorry.”
In a gravelly voice he said, “Well, will you go out with me now?”
“No, sorry.” Lucy shook her head and tried to walk past him. He put his hand against the wall, preventing her from entering the lounge area without making a scene.
“I’m trying to be nice.”
“I know you are, Rob, and I appreciate it. I’m trying to be nice too but please, you have to understand I’m just not interested.”
“Why?”
“I don’t want to and as I told you before I’m involved with someone.”
Once more she tried to push past. He grabbed her wrist tightly and she was frightened by his reaction. He seemed angry.
“Please let go of my arm, Rob!” she hissed softly.
“Not good enough for you, am I?”
She looked wildly around. This was getting so out of hand.
She whispered through clenched teeth. “Please let me go, Rob.”
His hand actually tightened on her wrist. Lucy managed to keep hold of her glass but most of her drink spilt onto the floor. Suddenly a sexy male voice spoke behind her then kissed her cheek. She felt two hands on her shoulders, pulling her close.
“Babe! Sorry I’m late.”
She tensed, wondering what on earth was happening and who had his arms on her. She wondered if she should scream and felt her heart pound rapidly. 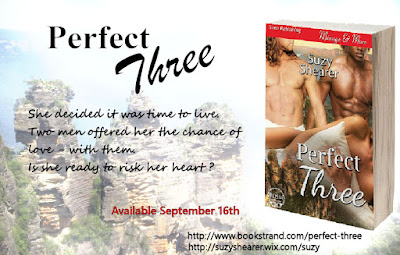 Sebastian reached him and roughly grabbed him around the neck, pulling him tight onto his lips. Jack’s arms wrapped around his lover as he fought to keep his balance. Sebastian’s tongue forced its way into his mouth, his hand grabbed a fist full of his hair as he held Jack tight against him. The kiss was forceful, heady and Jack found himself holding Sebastian even tighter so he wouldn’t fall. When they finally separated Sebastian looked into Jack’s eyes.
He growled. “You can suck my cock.”
“Ooh yeah. I’ve been wanting to do that for hours.”
“Strip!” Sebastian ordered as he pulled off his own shirt then removed the remainder of his clothes.
Jack wasted no time in shedding his, throwing them onto the couch. He looked at Sebastian. His cock was more than half erect and Jack licked his lips in anticipation. He took a step toward his mate. Sebastian breathed heavily through his nose. Jack looked him up and down. His rich dark skin almost glowed in the light, where it hit him there were bright highlights amongst the dark shadows. Those deep brown-black eyes seemed to bore into Jack. They were filled with such love and, at this moment, intense lust. Sebastian stepped backward a few paces until he could rest against the back of one of the couches. He put his hands on either side on the couch back, holding himself steady.
He exhaled noisily as Jack ran a hand down his chest. Jack leant forward and kissed his lover’s neck then laid a line of kisses down the centre of his chest. He licked across each nipple and was rewarded when they hardened. Dancing his way down Sebastian’s body with his mouth, he kissed and licked a path toward his objective till he finally gripped Sebastian’s cock with one hand.
“On your knees, sub!” grunted Sebastian. His guttural voice was filled with desire and excitement.
Jack dropped to the floor, his face at cock height. That glorious long dark cock nestled amongst the wiry black hair beckoned him delightfully. Jack ran his hand up and down experimentally a few times and was pleased when it got harder. A glistening drop of pre-cum was his reward so he leant forward to lick across the top. He heard Sebastian sigh as he opened his mouth and slid it over that wonderful dick. His own cock was hard as a rock as he began to slide Sebastian’s back and forth, in and out of his mouth.
Jack felt Sebastian grip his fingers in his hair, holding his head against his cock. Jack continued his assault on that delicious dick. He would wrap his tongue around it and suck hard as he pulled his mouth partly off it then he would push forward, Sebastian’s cock filling his mouth, pushing against the back of his throat. When it was almost out he would stick the tip of his tongue into the sensitive eye then roll it around between his teeth.
“Yes! Fuck yes!”
Jack grinned around the cock. He thought his own was becoming even harder as he sucked and licked with glee.
“Pull yourself,” Sebastian managed to gasp.
Jack needed no second invitation. He grasped his own cock with his spare hand and began rubbing his hand up and down in time with the strokes his mouth delivered to Sebastian’s cock. With his other hand he held Sebastian’s cock but had crooked his little finger against his balls, gently rubbing and squeezing them. He could feel one of Sebastian’s legs—the one leaning on his arm, begin to tense. Jack increased the speed of his sucking. He also sped up the hand jerking off his own cock. If he timed it right they would come together.
His own climax felt so close but Sebastian’s was even closer. Jack felt Sebastian’s fingers press hard into his head as he roared. Sebastian pulled him hard and deep onto his cock. The salty thick cum shot into his mouth and down his throat. He sucked hard on it, gobbling down every last drop of that delicious drink.
Sebastian pressed himself hard against the back of the couch as Jack let the flaccid cock slip from his mouth. Sebastian slid a hand down his arm and pulled at Jack, making him stand. Jack still pulled at his cock, jacking it off.
“Shower me, my love, let me see that cum all over me.”
Jack grinned at him and jerked his cock faster and harder until he felt it spurt from the eye. Yelling, he squeezed it, dribbling cum all over Sebastian’s chest and stomach until it glistened. He rubbed his cock then his hand across his chest until Sebastian’s skin gleamed with cum.
“Mmm, I love seeing you come. Now you can lick me clean.”
Jack loved it when Sebastian let him come all over him, he loved the after-play of cleaning him. He licked him, sucked on his nipples and nipped at his lover until Sebastian gave him his hand and got him to pull him to his feet.
The two men stood staring into each other’s eyes. Sebastian ran a finger softly down Jack’s cheek.
“I love you. You’re everything that’s good about my life.”
He rubbed his thumb across Jack’s bottom lip then pinched it between thumb and forefinger. He leaned in and kissed him. That kiss filled Jack with such love he wondered if his heart would burst. This man meant the world to him and he thanked the gods every day for sending him.
“Come on, my sweet sub, let’s have a quick shower then bed.”
Holding hands they went into the bathroom together, showered then enfolded in each other’s arms, fell asleep. 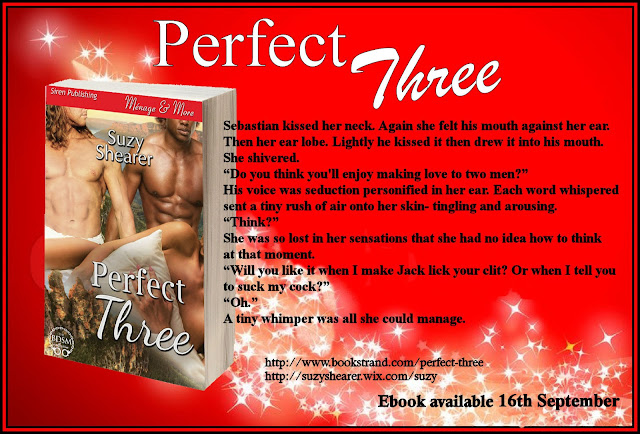