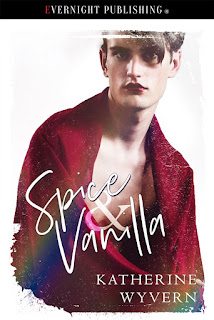 Say hi to Katherine Wyvern as she tells us a little about her new release.

Hello, and thank you so much for hosting me today and letting me talk a little about my new book, Spice & Vanilla!
Spice and Vanilla came about as a sum of two different story-lines that screamed to be put into words.
One was a spill-over from my previous release, Woman as a Foreign Language. In that story there was a male-to-female cross-dresser whose painful past of disclosure and rejection was alluded to only briefly. I wanted to expand on that element, and explore the tremendous emotional rollercoaster that all parties involved in such a coming-out will go through.
The second story line was sparked in one millisecond when a dear, dear friend of mine described himself as an angel with a bit of a devil inside. That immediately made me want to write this character that is constantly on the fence of… anything, really. He’s gender-fluid, bisexual, a really sweet man with a seriously dark side, and a switch on top of everything…
That was supposed to be a light and hot short story, but when it collided with the first story-line, it became a full length novel and an incredible emotional journey, with one of the most complex characters I ever wrote… there were times when I thought I’d lose my sanity trying to keep up with Raphael’s twists and turns.

Blurb:
Time was, when Di could dance all night. Time was, when she could ride any horse in the stable. Time was when she had a fiancée, a future and a home she loved. Until a silver SUV came out of nowhere and broke her life in half.
Well concealed under a sarcastic, spiny hide, Hugh has a darkly romantic, passionate soul. Torn between love and terror, he’s held the talented, elegant, magnetic Raphael carefully at arm’s length since the day they met.
Male or female, men or women, kinky or sweet, top or bottom? Angel or devil? Raphael’s life is a string of unanswered questions. And Lucie, his long-hidden female self, may bring it all together or destroy everything he has.
Be warned: cross-dressing, gender-queer, explicit M/M and M/F sex, anal sex, spanking, flogging, bondage, forced orgasm, sex toys 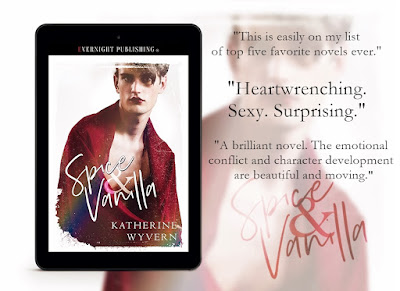 Excerpt:
Hugh watched him stroking away with great contentment. He was totally worn out after a crazy day at work, and it was not always easy to find the energy to satisfy such an enthusiastic masochist. There were days when he wished Raphael were a bit less fond of being spanked and whipped, but he always did his best to oblige him. The thought of his Raphael going out there looking for release from God-only-knows-whom, and getting hurt for real by some less scrupulous or talented Dom was just unbearable. Still, tonight he would lie back and relax. Mostly. I will have to help him eventually, he thought with a slightly evil grin, but I can take a breather first.
Raphael stroked in perfect tempo. He was one of the most technically exact musicians Hugh had ever played with, after all. Too exact, in fact.
It would do him so much good to let go a bit, to just go with the flow, be wild and imprecise and purely passionate. Then he would not need so much of this.
Tick—tock—tick—tock—tick—tock, went the metronome, and Raphael stroked and stroked. It was a good while before Hugh could tell, from a small furrow between those blond eyebrows, that the unchanging, slow rhythm was beginning to frustrate him. He smiled a bit wider and said nothing, devouring his beautiful quarry with his eyes. He watched, entranced the fluid play of flesh and skin as Raphael’s long pale cock, a nice ruddy purple by now, sank and reemerged into and from his fist, the velvet-like foreskin lapping beautifully over the shinier, silky glans, the testicles bouncing softly to the rhythm as the scrotum was pulled up and released. It was hard to resist the temptation to throw the whole scene to the devil and just take that cock in his mouth and suck it empty.
This is without exception the best use a metronome was ever put to.
Raphael’s body was developing a number of small, charming tics and twitches. He briefly lifted his left knee from the mattress then relaxed again. His right wrist was pulling on the strap from time to time, and his breath was coming in slightly ragged bursts.
Still it took a long time. Too much control, thought Hugh, smiling. Tsk-tsk.
Tick—tock—tick—tock.
He slowly unfolded his hands and moved to sit between Raphael’s legs. He spit on his middle finger and watched Raphael’s face, half hopeful, half anxious, as he slowly approached his anus. He didn’t hurry. He let Raphael wait for it. He would beg, in time, Hugh knew, but there was no need for that, not yet. He finally pressed his fingertip to the twitching, tight, live rose of flesh and felt it jolt and spasm. He massaged it in circles, with relish, and didn’t even try to penetrate it. Raphael was shaking all over, trying to press down on his finger, but there was just so far he could stretch, tied as he was. His belly muscles went taut. They were contracting in random, jerky convulsions. Hugh had never seen anything so beautiful.
Then Raphael missed a beat. His hand had picked up pace, ignoring all orders. Raphael whimpered, trying to compensate to get back in the right tempo. The double change of pace made him squirm all over. He swallowed twice and missed the beat again. This time Hugh slapped the inside of his thigh, very hard. Raphael could take a long regular series of well-spaced blows with relative ease, but a single hard slap coming down out of the blue like that drew a ragged cry from him. 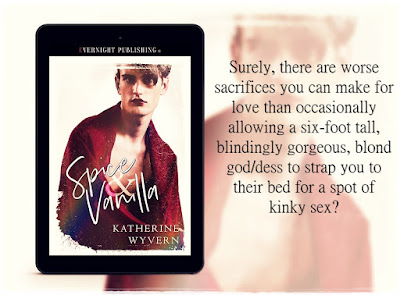 “You do know what tempo means, I asked?” Hugh said, in a plain chatty voice. He had never had any taste whatsoever for histrionics. He was not, he had never been, a theatrical Dom. He wasn’t in it for setting up a show. He just got the job done.
“Yes. Yes!” said Raphael, a bit frantic. He managed to stick to the rhythm for a minute longer, until Hugh gently stuck his finger just within the ring of his anus. All of Raphael’s body twisted, and he lost all track of the cold, mechanical rhythm of the metronome.
And that is exactly what you need, my love . Too much playing by the rules, too much fucking control. You need to find your own tempo, and just let go.
Five or six fast hard strokes followed. Hugh slapped him twice, on his thigh, and, when he turned suddenly, on his butt. And then Raphael came, on the third slap, as he flopped flat on his back again, crying out in pleasure or pain, or both. It was hard to tell. Semen spurted out in beautiful, long, arched white streamers, splattering over Raphael’s belly, chest, and even his face.
It is difficult to aim while being spanked hard.
Hugh watched him coming, avidly.
He was so naked. So vulnerable, so unguarded. Hugh, who felt, every day, that he might shatter like glass, on Raphael’s unearthly, impossibly graceful, self-possessed beauty, lived for these moments, to watch him released of all self-consciousness and all bonds. Strange, how it took a bunch of leather straps to get him to do that.
“Ah, oh, shit. That hurt,” Raphael whispered after a minute. “Not complaining, mind,” he added, with a small edgy laugh, wiping some drops of sperm from his lips and eyebrow.
“Good,” said Hugh, quite composed, despite the erection straining in his pants. Watching Raphael twitching and jolting while covered in glistening semen was not a sight to leave him unmoved. He reached out for the metronome, stopped it and lowered the weight a tad, then started it again.
This was a faster, business-like tempo.
“There you go, hot lips,” he said to Raphael, who was still breathing hard from his orgasm.
“What? Wh—but…”
Hugh gave him a small devilish smile. Raphael was perfectly capable of coming two or three times in one night, but, like most men, he needed a while to recuperate in between. Well, tonight, he wasn’t getting it.
“You didn’t think it would be that easy, did you?”

You can also find an exclusive excerpt on my website, here:
http://meetingivory.wixsite.com/katherinewyvern/spice-and-vanilla-excerpt

Find Spice & Vanilla at Evernight: https://www.evernightpublishing.com/spice-vanilla-by-katherine-wyvern/
Or on Amazon: https://www.amazon.com/Spice-Vanilla-Katherine-Wyvern-ebook/dp/B07CWFZYFS/ref=sr_1_1?ie=UTF8&qid=1525683799&sr=8-1&keywords=spice+Vanilla+Katherine+wyvern