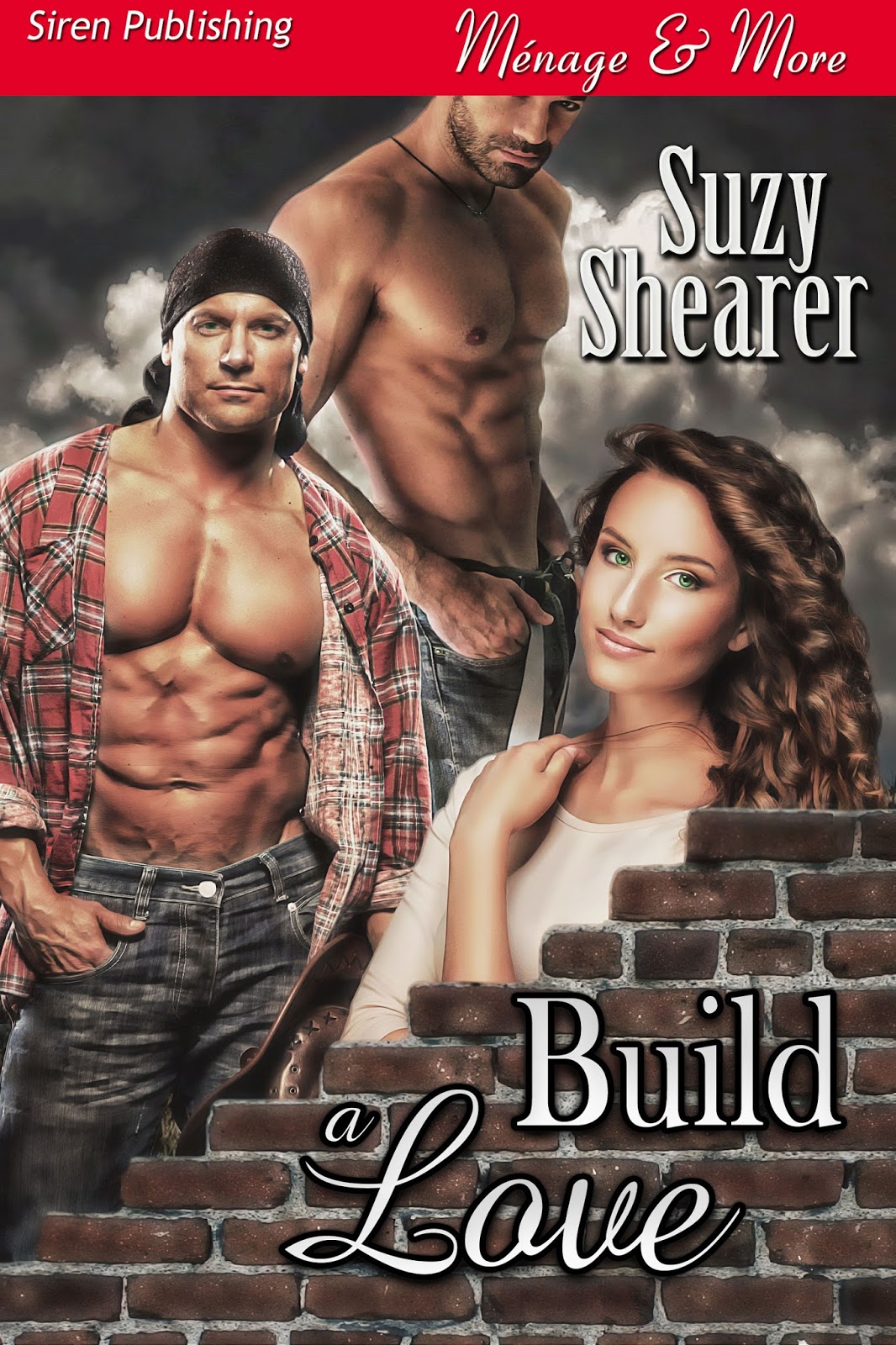 Just received the cover for my latest book due out toward the end of October.

So happy with it!

This book tells the story of Harriet 'Harry' Kempton.  Harry is 38 and has just arranged to have a studio extension built but what she never expected was to have her heart stolen by two hunky builders.

Bryan and Marco have been happily in love for the past 15 years, they've built their love and their home but then they meet Harry.

Harriet has spent the last twelve years of her life being an Ice Queen to protect her heart. Stabbed, raped and left for dead she feels she can no longer trust any man.

She is shocked when she meets two handsome builders, Bryan Garrett and Marco Campione. Harry feels an instant attraction to them both and wonders if it’s time to take a chance on love again.

But can she get over her past and move on? Even more important - can she accept a relationship with not one but two men?

Two men who have a loving sexual relationship with each other but want Harry to complete them.
Harry has a demon to fight if she has any chance of future happiness.

Will these men stand alongside her and help her or will her past be too much for them to handle?

A Hunter's Choice by Suzy Shearer

My latest book in The Hunter's series is due out. At the moment you can get a 10% discount on the price.


For your chance to win either a copy of A Hunter's Choice or book one - A Hunter's Heart - just leave a comment on my FB page and tell me what is your favourite paranormal creature. 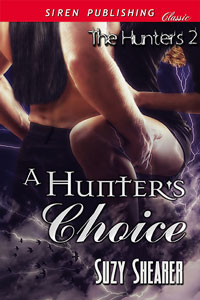 This book follows the story of Tomas, the brother of Matei who we met in book one - A Hunter's Heart.  Tomas has been assigned to Matei's area while he and Charlotte are on their honeymoon. Little does he know that his life is about to change in a marvellous way.

With the help of Micheal and Louisa, Tomas heads off to investigate what looks to be the work of  two strigoi (vampire).  Imagine his surprise when he gets attacked by a strigoi when he is finishing off another.

Left dangerously wounded and losing blood, Tomas stumbles through the forest wondering if this will be his last day on earth when he comes across a tent in a small clearing. He falls unconscious only to wake to see his One staring down at him.

The beautiful Julie Smith is terrified by the feelings of love meeting Tomas has generated, not to mention the strigoi that tried to take her—oh and Tomas sinking his fangs into her wrist and drinking his blood. She did what any sensible woman would do—she ran!

Join Tomas, Michael, and Louisa as they search for Julie only to uncover more strigoi in one area than any Hunter thought possible!
EXCERPT
She looked at him warily. She was just so confused. The man was gorgeous, tall. Around the six foot eight she had thought, and muscular. Those amazing green eyes seemed to see into her soul. Despite her fear, she felt very attracted to him, in fact her attraction to him was almost overwhelming her. She was having difficulty thinking sensibly of anything other than him.
Crazy, really, he looked about thirty and she was forty-two. He held his hands out to her again. For a moment, she wondered what those hands would feel like running across her body, then she shook her head, remembering what had happened. She was wondering why the hell she was thinking about sex!
“How do I know you won’t bite me again?” she asked warily.
“I promise I won’t bite unless you want me to.”
In that instant, Julie imagined his mouth on her breasts and she felt herself get hot thinking about him. She heard a snicker. Looking over, she saw Tomas was smothering a grin.
Oh no, did he just know what she was thinking? She had to think of something else. Something that didn’t involve him biting. Damn, that is no good, now she was thinking about him biting her lips.
He gave a guffaw.
She tried to glare at him, tried to get her thoughts back on track. Damn, he was looking at her and she could see desire on his face, his lips partly open. Wow, imagine those lips! Bet they would taste amazing. Imagine them licking her body, she closed her eyes and thought about them running across the top of her legs and settling against her mound.
He gave a slow, sensual laugh.
Shit!
“Get out of my head!”
“I’m so sorry but your thoughts, they…I would…damn, they are pretty exciting.”
The more Julie tried to think about something else, the more she thought about sex. In the end, she threw her hands up in disgust and moved closer toward him.
“You make one move to bite me and I’ll…I’ll scream! Then I’ll hit you with this.” She shook the large flashlight at him.
Hiding a grin, he agreed.
“So tell me, you bit me, you had fangy teeth.” She sounded angry still. “What the fuck is going on?”
He sighed. “This is going to take a while to explain.”
“Guess what? I don’t plan on running through the forest in the dark.”
“Good, I don’t feel like chasing you through the trees tonight, maybe another time.”
For some reason that started her thinking of sex again. She gave a soft groan and shook her head resignedly.
“Just tell me.”
“How about you sit down?” He gestured to a rock that was close to the fire. “I’ll sit here.” He pointed to the ground nearby. “That way you can hit me with the torch if you feel the need.”
He dropped onto the ground near the rock, Julie just glared down at him. He was just about to start explaining when both of them went still. Julie looked at him, fear in her eyes. She stepped toward Tomas.
He held a finger to his mouth and quietly stood.
Julie felt clammy. She felt like thousands of spiders were crawling all over her. She tried to brush them off. Suddenly she had the urge to walk off into the trees. She started to move but Tomas pushed her down onto her knees.
“Ignore it. Listen to my voice and no other.”
Tomas then walked away from the fire, toward the trees. Julie could “hear” him talking to her in her head but she could also hear someone calling to her, telling her she must come.
“Julie, listen to me. Stay there beside the fire, please.”
Suddenly a man appeared. He looked at Julie and then at Tomas. He beckoned to Julie. She stood, then went to move toward him. He looked at her, telling her that she loved him and wanted him. He was so handsome, so loving. He would protect her from Tomas.
Tomas moved fast, in a heartbeat he was between her and the man.
“No Tomas, go away!” She tried to push by him. She whined, “Let me pass.”
Julie tried again to move past him to reach her man. Tomas leapt, he had a knife in his hand and Julie screamed.
The man looked away from her, instead he had his eyes on Tomas.
It was as if she had been blind and could now see. Instead of the handsome man, a gross skeleton-looking creature was standing near her. The stench from him was overwhelming and Julie fell to her knees retching. It looked even worse than something from a horror movie.
Tomas lunged with his knife and caught the creature in its side. Tomas turned quickly and punched it in the face while driving his knife deep into its chest. The creature went down on its knees and Tomas slashed across its throat.
He stepped back and raised one hand.
All at once, there was lightning. He pointed his arm at the foul thing and a bolt of lightning hit it, disintegrating it into dust.
Quickly, Tomas was at her side, holding her hair as she vomited. When she stopped, he lifted her in his arms and carried her to the tent, laying her on the sleeping bag.
“What…What was that thing?” she stammered. “What did you do?”
Julie started crying. It was if all her nightmares were coming to life.
“It’s called a strigoi, or what you would call a vampire.”
“Vampire? Vampire!” She shook her head in fear and sat up. “There are no such things as vampires.”
Posted by Suzy at 10/14/2014 12:38:00 pm No comments: