Hi there, everyone! I'm Michelle Roth and I'm here to introduce my latest release, Calculated Risk. It's a part of the Men For Hire anthology! If you or your readers have any questions for the authors, feel free to use the #menforhireantho hashtag on Twitter and we'll reach out to you with answers!

I'm working with three other fantastic authors! Here's the line up of stories:
Got Muscle by Tina Donahue Menage at Mealtime by Bella Settarra Calculated Risk by Michelle Roth Marital Duties by Jennifer Denys

Stella Whitman has inherited her mother’s country home. When she finds it in utter disrepair, her cousin suggests that she call Men for Hire in search of a handyman. When he arrives, she’s somewhat shocked to find that his deep brown eyes and rugged good looks are giving her some very inappropriate thoughts.
Despite his instant attraction to Stella, Ian Starling has convinced himself that they need to keep things strictly professional. He’s been burnt before and has vowed never again. It becomes increasingly more difficult as he gets to know her, though. Then one rainy night changes everything…

- What sort of trials? Earlier, you mentioned marriage. That's probably the worst of it. I got married young. My ex decided after nearly ten years of marriage that she much preferred the me that didn't give a damn about money or bills or responsibility. It broke my heart.
- Are you still in love with her, then? Talk about getting right to it. Christ. But to answer your question, no. I think I just held on out of sheer stubbornness. We hadn't been right in a long time. I just wish she hadn't been so bloody brutal about ending things.

Michelle Roth is a novelist from the Great White North (Toronto, ON). When she’s not disappearing into foreign lands, or making two perfect strangers that she invented fall in love, she’s probably curled up somewhere with a glass of wine and a good book.
In her spare time she is typically hanging out with her awesome boyfriend and their two equally awesome cats. She likes taking road trips to nowhere in particular, cooking elaborate meals then making other people do the dishes, and being nerdy on the internet. Her books are currently available on Amazon, Nook, Kobo, and any other place that sells absolutely filthy romance novels.

FALLING IN LOVE
by
Tina Donahue 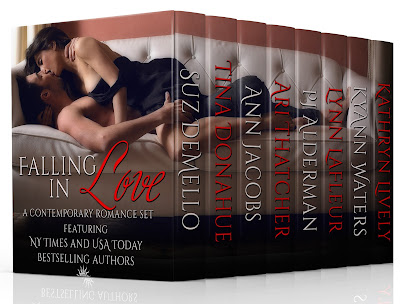 Recapture the moment . . . Falling in Love


WALK LIKE A MAN, a heartwarming novel by award-winning author Suz deMello
A heroine to root for, a wounded hero who’s pure fantasy, two lovable characters who can’t help falling in love . . .

MAKE ME BREATHLESS, a steamy novella by bestselling author Tina Donahue
Two rugged cowboys know what they want: the biker chick who just became their neighbor. Falling in love can sometimes happen for three, not just two . . .

COMMITMENT, a sexy romantic novella by award-winning author Ann Jacobs
For these long-time lovers, falling in love means learning that commitment doesn’t have to mean losing the magic they’ve shared . . .

LOVE ME NOW, a sexy novella by USA Today bestselling author Ari Thatcher
Long ago, he inadvertently overlooked her, but he can’t get enough of her laughter now. He’ll give anything now for a chance to earn her love . . .

A KILLING TIDE, NY Times bestselling novel by PJ Alderman
He’s investigating a killing, and her brother is his prime suspect. Not the best timing for romance, but neither he nor she can resist falling in love, no matter what . . .

WORTH THE WAIT, a sexy novella by bestselling author Lynn LaFleur
Falling in love can happen at first sight. He does, and he’s determined to persuade the woman who’s given up on the emotion that Happily Ever After is not a myth, but a certainty . . .

GEEK MEETS GIRL, a novella set in the world of sci-fi reenactments, by Kathryn Lively
A Time Lord, a Trekker, and a ghostbuster walk into a science fiction convention. One finds love, one finds trouble, one finds both . . .

Sensual Romances for Every Mood

Surrendering To The Beast by Tina Donahue

To celebrate the upcoming release of Surrendering to the Beast, Tina is giving away FIVE full-length, bestselling, award-winning romances to one lucky winner - 25 titles to choose from.

Blurb:
When she’s good, she’s very good. But when he’s bad, she’s better.
Taming the Beast, As a good fairy, Heather is empathetic and chaste to a fault. No bad language, no dirty thoughts, flirting and no sex. But when a satyr named Daemon steps up to her reception desk at From Crud to Stud, she finds herself on the fast track to exquisite corruption.
Daemon is the total bad-boy package with a kiss straight from the dark side. Though he’s here for a supernatural makeover, Heather can’t imagine why any red-blooded woman would want him to change.
A disciple of the god of wine, Daemon has had his share of good times. But sex has never been this good. Heather brings out a new side of him, a side that makes him want to protect as well as pillage.
But Daemon needs a little creative backup to help set his fairy’s naughtiness free. And that means bringing in Mistress Jin. Under the genie’s tutelage and Daemon’s shameless lust, Heather is about to learn what it means to let loose.

Warning: Not your typical bedtime story. May lead to indecent behavior, a taste for voyeurism, discipline, bondage, m/f, m/f/f and f/f action, which will result in screaming orgasms. Proceed with caution.

Excerpt:
Heather steeled herself to do battle with Satan. Cautiously, she faced her webcam and his image on her computer monitor. This evening, he’d assumed the form of a European playboy, a snifter of cognac held casually in one hand, dark hair slicked back, his blood-red ascot contrasting nicely with his white shirt and navy blazer.
He certainly knew how to dress.
“Cara mia.” Heat smoldered in his voice and dark eyes. “What can I do to you?”
“For me,” she corrected gently, wondering when he’d ever get that right.
Grinning, he focused on her white peasant blouse and jutted nipples, her areolas tightened from the chilly weather, not him. Tonight was damp and cool thanks to a spring storm that continued to rage in the French Quarter. Lightning flashed and the office lights flickered.
Flames flared briefly in his pupils. “We’ll do many things to each other, no?”
Heather smiled politely, a knee-jerk reaction for a good fairy. Needing to get tough, she held up his overdue bill, hoping he’d look at it rather than her chest. Her hand shook so badly the paper rattled.
“How you tremble,” he cooed. “How pale you are. Allow me to put some color in your lovely cheeks. Heat that will last an eternity.”
Her skin got even clammier. “Please, just pay your account.” She waved the paper and talked fast before losing her nerve. “Your grandson failed to show for his last two appointments. I’m sure he had a good reason. Unfortunately, he didn’t call to cancel.” She offered an apologetic smile and pressed on. “Because you’re the cardholder, we had to charge you for the time. I’m so sorry, but it is the rule.”
One she was honor-bound to enforce as an employee of From Crud to Stud, a makeover service for supernatural beings. Howls from weres, hisses from vampires and obscenities from demons poured from the treatment rooms. Those poor souls were going through proverbial hell to suppress their beasts. They longed to date mortal women without freaking them out, while also winning their hearts the normal way. With real charm, not magic, with integrity and love, not lies and manipulation.
But these makeovers took the staff’s valuable time and clients needed to pay for the effort. Even Satan should understand that.
He gave her an indulgent smile. “What charges?”
Gasping, she dropped the flaming paper in her trashcan before it burnt her fingers.
“Later,” he said and killed the call.
Hurriedly, Heather put out the small blaze, chiding herself for letting the account get to this point. She should have been firm with Satan’s grandson when he signed up for the service. Determined to make up for being too nice, she brought up her bank account to pay the charges herself. She was about to transfer the funds when the lights flickered twice, thunder boomed and the front door flew open, banging against the wall.
She flinched.
A blast of dank air and rain blew inside, followed by a guy who looked to be thirty or so. He wore a black cowboy hat, snug navy tee, low-slung jeans and cowboy boots.
Once he shoved the door shut, he slumped against it, breathing hard.
Heather stood so quickly her chair rolled into the wall.
He didn’t notice. He’d closed his eyes and raised his face to the ceiling, his prominent Adam’s apple bobbing with his hard swallow.

Alarmed yet intrigued, she regarded the short, dark hairs on his throat and took the rest of him in. His rain-dampened hair was the color of dark chocolate, thick and wavy, flowing to his broad shoulders. They heaved with his next ragged breath. Tall, possibly six-three, he was lean yet muscular. His wet tee clung to his well-defined pecs and abs, those bruising biceps. Stubble covered his strong jaw, upper lip and cheeks. His bronze skin spoke of days in the sun.
Even from where she stood, Heather smelled his scent. Clean and masculine, a woodsy, fresh fragrance along with something else…the unmistakable odor of liquor.
Uh-oh. It wasn’t often that mortals, drunk or otherwise, happened upon this place. When they did, Heather had ironclad rules to follow. First, buzz Constance, a voodoo priestess who could remove memories by laying her hands on someone’s head. Following that, Heather was supposed to buzz Becca, a half-mortal witch who owned this place.
Heather leaned over her desk to press the intercom button.
The guy turned to her, blinked slowly and stared.
Her hand stalled.
His eyes were amazing, the color of Lipton tea, ringed by long, sooty lashes, his attention riveted as he drank her in. Given his slow, sexy smile, Heather suspected he was undressing her with his eyes.
She swallowed and was about to press the button when he groaned suddenly and mournfully, the sound of someone in serious pain.

About Me (You know you want to know!): I’m an award-winning, bestselling novelist in erotic, paranormal, contemporary and historical romance for Kensington, Samhain Publishing, Ellora’s Cave, Siren Publishing, Booktrope, Luminosity, Decadent, and indie. Yay! Booklist, Publisher’s Weekly, Romantic Times and numerous online sites have praised my work, and trust me, I’m forever grateful for that.
I’ve had my books reach finals in the EPIC competition, one title was named Book of the Year at a review site, and others have won awards in RWA-sponsored contests. I’m actually featured in the 2012 Novel & Short Story Writer’s Market. Talk about feeling like a freaking star.
Before my writing career, I was the editor of an award–winning Midwestern newspaper and worked in Story Direction for a Hollywood production company.
Outside of being an admitted and unrepentant chocoholic, I’ve flown a single-engine plane (scary stuff), rewired an old house using an electricity for dummies book, and have been known to moan like Meg Ryan in When Harry Met Sally whenever I’m eating anything Mexican or Italian. Yeah, I like to eat (burp).