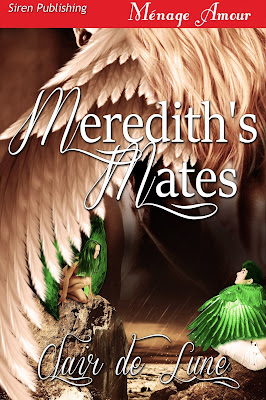 Trouble is brewing on Hades. Strome has a reputation for cruelty and when he tries to force a pair of innocent young people into mating with him, winged Meredith goes to rescue them. Little does he expect his life to change forever. He meets and rescues the mates he's been searching for all his adult life.

Safely back on Prosper, he sets out to win their love and make them forget their ill treatment at the hands of Strome. However, a misunderstanding brings danger to his mates from an unexpected quarter. 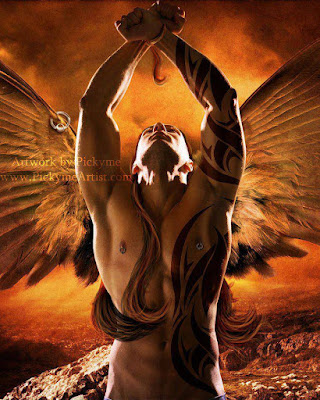 Will Meredith succeed in thwarting the plans of a wicked woman determined to get her way?

Will he rescue his mates from a future of slavery, and can he convince them of his true feelings toward them?


Background to the story
After I’d written Angel in Hell, based on an image sent to me by a reader, another reader sent me this image of a bronze winged being and inspired Meredith’s story. He was a significant minor character in the first book, and I felt he deserved his own story.


5 questions for the author:
1.      Why is the series called Angel in Hell?
I mentioned the picture that a reader sent to me.
When I began to think of the story I came up with the idea of a whole new world. Two races of winged beings live on two islands. I chose the names of Hades and Prospero. They are opposites and where Hades has barbarous customs, Prospero is enlightened. After naming one island Hades, there was only one possible title for the book.
2.      Are there going to be any more in this series?
I can’t imagine there will be another, but I only expected to write one, so I’d better not say there never will be one.
3.      What else is there in the pipeline?
I have a short story in an anthology to be published by VINVATAR in the New Year. It’s a re-issue of Life on the Edge with a brilliant new cover.
4.      What of Prometheus in Chains?
I am writing the next book in the series. As so many of the Doms seems to have entered stable relationships it’s time to introduce a few new single Doms and a couple of subs. That should make life interesting in the club.
5.      What of Flora McGregor?
I am writing a second wolf shifter, this time it will start out as MM, but it’s a ménage.
Which one will be first? Well that very much depends on the characters.

Author bio:
I live in Dumfries and Galloway in Southern Scotland, although I was born in South Yorkshire. I spent many happy years teaching, and when I retired, I became bored with just the domestic routine.
My youngest son challenged me to write a novel of my own, and I wrote Initiation, book one in the Prometheus in Chains series. Since then, writing has become an important part of my life. It’s been like a roller-coaster ride, and a very pleasurable one at that. When I sent off my first book to Siren, I had no idea what I was setting in motion. I joined Facebook, something I never dreamed I’d do, but I have made many good friends on there, some readers and some fellow authors. Writing has certainly changed my life.
I am very grateful for all the help and advice I have received from everyone at Siren, especially my editor, and Christine for so many beautiful covers. A special mention goes to Sage Marlowe for his encouragement and for beta reading my books. I thank Master "K" for his encouragement over the Kinbaku scenes. I am grateful to Lyn L. for beta reading this book. I am also indebted to my many readers and friends on Facebook, for their unfailing support and affection.
I would love to hear from you, and I always answer e-mails or contacts on Facebook.

The Making of a Goddess Book 1
by Georgia Carter Mathers 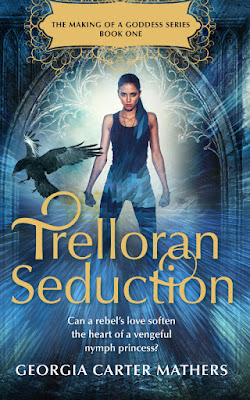 There is no such thing as an individual. All the humans think of themselves as units with predetermined roles, and they do not grow old with their lovers. The females are sacrificed when they turn thirty, leaving their male counterparts behind.


Princess Kaitlau is a nymph who can take any form. She is also a refugee. She came to Volen through the charmed window after escaping her prison on Trellora.

King Ganim, the vampire who is thought to have created Kaitlau, must be punished. She had thought he loved her as a father, but that could not be. Although he was never present in the chamber, the king had ordered the priests to repeatedly rape her. Merely punishing her father is not enough. She wants him dead. It will be done.

Kaitlau has been observing a particular rebel killing priests on Volen. He is just the one to help her. But feelings for the rebel start to emerge when he agrees to carry out her assassination plans, and gradually as they work together, love begins to matter more than revenge. 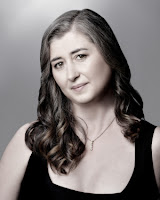 Georgia Carter Mathers finds it hard to describe why she writes. She only knows that she must write. She has been writing on and off since her teens. Always self-conscious, Georgia is enthralled by the world of stories. She holds a degree in Psychology, an Associate Degree in Creative Writing and is currently studying publishing. She loves reading, and she loves writing, especially when her characters argue with her. Georgia lives in Sydney with her husband and son, and she enjoys being able to sleep when she's not busy writing down her dreams and/or nightmares. 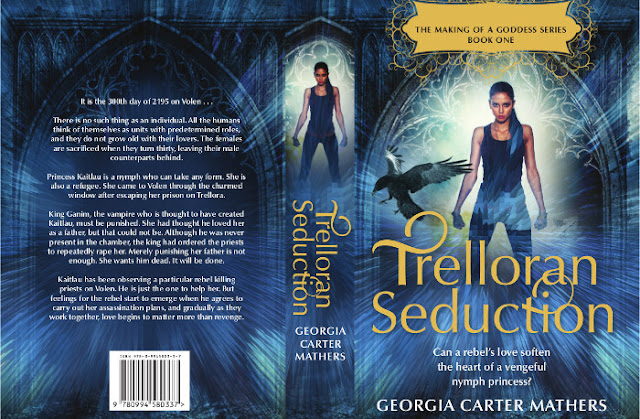