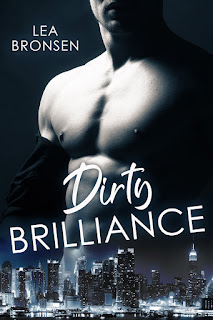 Everything can be bought. Except love.

Kace Karrington is a wealthy, self-made investor with no qualms about steamrolling others to achieve his goals. He’s attracted to men, but picks up beautiful women, giving the cold, unfeeling world of Finance the appearance he’s successful...powerful. That is until he meets a smoking hot street punk eager to show him there’s more to life than making money.

Put the book on your to-read shelf on Goodreads

See photos that inspired me to write the book on Pinterest

And then happens what happens to me once in a long while: he catches my attention. I mean really makes me stop and stare. I’m attracted to men, after all, and some can be surprisingly handsome. This specimen is a lot more so than one would imagine of a drug addict. Strong, symmetrical features and tanned skin make quite the tableau with full lips, an aquiline nose, and dark green, gold-flecked irises framed by thick eyelashes. Even unkempt blond hair and a three-day stubble look sexy on him.
This is the guy who calls himself my sister’s friend? He’s so easy on the eyes, he has to be more than a friend.
He scowls. “Do you always do that?”
“Do what?” I take in the rest of him. He’s my height, but much skinnier. Probably can’t afford to go to a gym and do weights three times a week like I do.
“Refuse to shake someone’s hand,” he replies, tone offended. His voice sounds light but mature. Warm, comfortable to the ear. “While your sister’s in there…fighting for her life.” Tears form in his eyes. So, their redness was due to him crying.
“Sorry, it’s the nerves.” I give him my hand.
“Yeah.” He accepts to shake it, but his wet glare tells me he’s not convinced.
Me? I’m so taken aback by his good looks and intense presence, I almost forget why I came out of the room.
Oh yeah. Coffee. 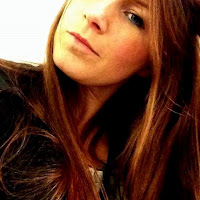 A Wolf's Tale by Suzy Shearer...

My latest book is released. I really had fun writing this one. 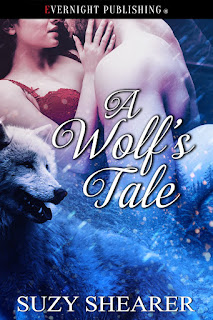 When veterinarian Emily Brownstone, 55, found a poisoned wolf on the roadside, she didn’t realise the chain of events that would follow.
Someone was trying to kill off the native wildlife and Emily’s action in saving the wolf would threaten her life but would also bring her the man of her dreams.
Tate Collins, 57, couldn’t believe his luck—he’s finally met his soul mate after all these years. All he had to do was tell her his secret—and it was a big one! He just hoped she wouldn’t freak out.
​
​On her way home one snowy afternoon Emily finds a large unconscious  wolf in the middle of the road. Suspecting it has been poisoned she flags down a car to get help moving it.
​ 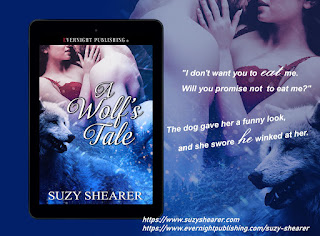 Taking it back to her home she is amazed when it allows her to help it. Over the next few days it gradually heals and Emily falls in love with the handsome blue-eyed wolf. When she releases it back into the wild she feels heart-broken and wonders if she'll ever see it again.
​
The last thing alpha Tate expected was to get poisoned - but when he discovers his saviour is his mate he has to pretend he's just an ordinary wolf.
​
Once healed he wrangles an introduction to the beautiful vet. Together they need to find out who is poisoning and shooting the wildlife before it's too late.
​
But that's not his only problem - somehow he has to let her know that he spends a lot of his time running around on four legs!